The Republic of Kiribati

The Flag of the Republic of Kiribati

This page is compiled by Tebania Tebakabo User:Tebania. As such it is a personal perception of the author and is in no way a reflection of the views of the Ministry of Education Youth and Sports. 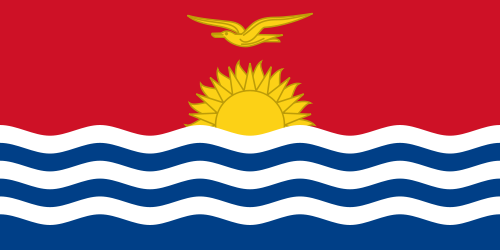 The Flag of Kiribati depicts three important aspects of life in Kiribati. They are the blue pacific ocean, the strong sunlit islands in the pacific ocean, and the frigate bird which is the power bird of the winds and the sunshine in the deep tropics of the South Pacific.

The Islands of Kiribati

The Republic of Kiribati is made up of 3 groups of Islands i) the Gilbert Group to the West, ii) the Line Group to the East, and iii) the Phoenix Group to the South. There are altogether 33 coral islands scattered north and south across the equator and west of the International Dateline.

Map of Kiribati
Twenty two of the islands are inhabited. This leaves 11 islands which are not. These are islands in the Phoenix Group. One of them is the New Millenium Island which 'saw' the first sunrise of the new millenium. The name Gilberts came after one of the discoverers Capt. Gilbert who discovered some of the islands in 1788.One of the 33 islands is Arorae Island. For more information on islands see A typical Island

Current theory on the origins of the Gilbertese people is linked to 2 migration waves. The first migrants were part of the general migration from South East Asia through Melanesia. The second came via islands of the Micronesia to the northeast. These are based on evidences including language and useful food and fibre plants which includes coconuts, breadfruits, babai, and pandanus found to be native to South East Asia/Indonesia. The culture of the I-Kiribati people is unique and is a blended lifestyle based on the environments of the land and the sea. Viewers are encouraged to find out more about the culture of the I-Kiribati by visiting Life_in_Kiribati/Culture/Dancings

The Republic of Kiribati gained political independence in 1979 after over 40 years of British rule. Based on the West Minister model, with the Beretitenti heading the State and Government of Ministers, as found in Commonwealth Countries, Kiribati emerged a new Nation, in line with a wave of democratic freedom that swept through the Pacific Region in the 1970s. Return to User:Tebania

South Tarawa is one third of Tarawa Island and houses the Capital of Kiribati. It is the only urban part of the Country. All administrative headquarters for government and non-government organisations, social services, media, transport and communication, entertainment, and gateway to the World are situated on South Tarawa. The land mass on South Tarawa is around 16 square kilometeres. Forty four percent of the total population lives on less than 2.2 percent of the total land mass. This makes urban Tarawa densely populated. This large population ratio on South Tarawa puts presssure on social services and natural resources and contributes to health risks, including overcrowding, unemployment, and crime. Return to User:Tebania

People on the Capital

One finds the majority of the working cohort on South Tarawa. See also employment and work Life_in_Kiribati/Work/Professions. The majority of the government employees are non-indigenous to Tarawa. Most of them live in government quarters.Life on the capital is city dorminated, more individualistic, commercial, and culturally misaligned. In urban Tarawa, people maximise personal gains. Return to User:Tebania

32 of the outer islands are separated from Tarawa by sea distances of between 30km (to Abaiang -the nearest island) to 3,000 km - the distance between Tarawa and Tabuaeran island in the east. These 32 islands share 97.8 percent of the land mass in Kiribati. This is the same land mass where 56 percent of the Kiribati population lives on. These 32 islands form the rural sector of Kiribati. Life in the rural sector (outer islands) is structured around subsistence living and community sharing. People in the outer islands are more 'bound' by traditional roles, customs and practices. Family ties are strong and communal norms dominate. On these rural islands people maximize cummunal gain. Return to User:Tebania

History of Formal Education in Kiribati

The start of formal education in Kiribati is related to the arrival of the Missionaries of the American Board of Commissioners for Foreign Missions. One of them is Hiram Bingham. He arrived on Abaiang on the 13th of November 1857. This was a start to around two centuries of Christian missionaries work in Kiribati that changed the culture, traditions, customs, and steered the education system away from cultural and traditional modes to a formal and academic system found in existence for about 150 years in Kiribati till today. Return to User:Tebania

The Education System in Kiribati

Preschool for children in the age range preceding primary age of 6 in Kiribati is common though preschools are not state owned nor run. These preschools are privately run and owned by Communities. For a more comprehensive treatment of preschools and ECE viewers are asked to link to User:Bbaukin.

Compulsory and free basic education starts from the age of 6 in Kiribati. This runs on for 6 years after which students then completes the primary phase. Return to Life_in_Kiribati/The_School_System

Senior secondary education starts at Year 10. This is a 2 year programme that leads to a School Certificate qualification. Students are selected based on merits into senior secondary schools. Only 23 percent of senior secondary schools are owned by Government. The rest are privately owned by Church Missions in Kiribati. At the end of school certificate level, the South Pacific Board for Educational Assessment (SPBEA) runs a Year 12 and Year 13 course. The former is equivalent to Foundation Programme at University level. The latter is the terminal point for most of the I-Kiribati student's academic persuits. Return to Life_in_Kiribati/The_School_System

After senior secondary, successful students continue to pursue Science, Arts and Technology courses mainly in Fiji, though some do go to Universities in Australia and New Zealand. In Kiribati there are i) the Teachers Training College, ii) the School of Nursing, iii) Police Academy, iv) Technical Insitute, v) Marine Training Centre, vi) Fisheries Training Centre, vii) Tangintebu Theological College, and viii) the Christian Inistitute for Christian Development. These are tertiary institutions that offer technical and vocational training for the local needs in Kiribati. For statistics data on Schools in Kiribati viewers are asked to connect toUser:Eritai_Temwaaka.

Kiribati is a country bathed by the Pacific ocean. It therefore is remote and far from developing Countries and more so developing technologies. ICT is a prime example. Transport and communication is a real challenge in Kiribati and it is safe to say that telecommunication technology and transport technologies are developed not for the scenarios of Kiribati, but for more conventional enviornments such as in Europe. The distance between Kiribati and developed communities means that Kiribati does not enjoy the peripheral advantage of advanced technology, for example orbitting satellites and hence cheap and sustainable communication. For this ICT education in Kiribati remains a challenge that is yet to be rationalised and designed into the normal conventional educational streams. For one, ICT education would prove costly. Two, it would require substantial sustainability, and three, it would require mass education, support, and moreover localisation for it to be assimilated into normalised and localised settings and systems. Return to User:Tebania

Mass Education and ICT in Kiribati

By the very nature of our vast scattered islands and communities in Kiribati, conventional educational services can not be expected to deliver conventional and high quality outcomes. This is saying that because our islands are scattered, delivering educational services to the scattered population has very real limitations defined by distance, technology, and resources. This calls for a new paradigm shift in delivering educational services. Open and flexible distance learning is proving a model that Kiribati can pursue. If educational services can be made available to the mass by means of ICT, and flexible modes, then Kiribati would have achieved some success in achieving equity, quality and access. The notion therefore of 'open and free learning' is a tune that Kiribati must learn, because it has far and reach out implications. Therefore the notion of open and free learning through ICT holds the key to opening educational and learning doors in Kiribati. This is the tune of this page, and that is to design an open and free learning opportunity for I-Kiribati in this new era of educational change, and technological topology. The following prescribes the strategy to open up windows of exposure to the possibilities available through the Wiki. Suggestions are much welcomed. Please post comments on the user page User:Tebania. Happy readings.