Biology In Elementary Schools is a Saint Michael's College student project from a course that ran between 2007 and 2010. The student-created resources have been preserved here for posterity. Link under 'toolbox' for printer-friendly versions of the exercises. Click on handouts to print full resolution versions. Please see Wikieducator's disclaimer, our safety statement, and the Creative Commons licensing in English and in legalese.

Briefly categorize your idea as tried and trusted, tried at least once and worked well, or brand new and untested.

This experiment allows students to examine a chemical reaction between baking soda and vinegar. They will be able to see this through a balloon blowing up because of the reaction. The students will try certain amounts of vinegar and baking soda and see how it affects the balloon. They then will measure the size of the balloon. They will graph the size of the balloons so they will be able to see the difference in size when it comes to different amounts of vinegar and baking powder. [4]

In order to do this lesson in a timely fashion we found that it is best to have a few bottles already set up. Students were able to measure vinegar and baking soda into one bottle together. First they measured two tables spoons of vinegar into an empty water bottle. They then measured 1/2 a teaspoon of baking soda into an empty balloon. Before the students mixed the vinegar and baking soda they weighed the water bottle(with the vinegar). They were then asked to predict if they thought the weight of the water bottle would change after the chemicals were mixed together.

Students then were able to use a string to measure around the balloon. The string was then laid out flat so that they could find the exact length of the string next to a ruler. If you have a cloth tape measure then that might work better. Students then had the opportunity to place the measurement on a chart. The x axis of the chart is the amount of vinegar and baking soda, the y axis is the circumference of the balloon. They will also be able to weigh the balloon after the chemical reaction to see if their hypothesis was right. This information they will record on their handout sheet.

The experiment was then repeated with different amounts of vinegar and baking soda. REMEMBER- you must not go over the suggested amount of baking soda (1 tsp.) or vinegar (4 tbsp.) in this experiment due to the risk of bursting the balloon sending baking soda flying. It is also important to remember to test this experiment with your balloon before the lesson. This is because balloon material changes in different brands.

A potential pitfall could be adding too much baking soda or vinegar. Due to this issue students will be closely monitored so that no issues arise that might create the balloon to blow up and get baking soda all over the place.

Students will be asked to cut a string the length of the circumference of the balloon. It will be measured, and a ruler will be used for accuracy. Graphs will be used to display the results of their balloon measurements. Another math connection is that we will have students weigh the balloon and water bottle before we mix the baking soda and vinegar, and then again after we mix them. Three different trials will be done to ensure precision, with multiple trials the students will be able to account for the mean by applying mathematical principles.

The history of the Conservation of Mass will be discussed prior to the lesson, key actors- including Lamonosov and Lavoisier will be introduced through a handout. Also we decided to look into the history of the balloon. It was first used by Professor Michael Faraday in 1824 for use in his experiments with hydrogen at the Royal Institution in London. He originally used hydrogen to inflate the balloons which brought play and joy to the balloon world, but also it brought danger. Hydrogen explodes easily and catches fire easily as well. Eventually it was discovered that helium was a safer alternative to inflate the balloons. Helium is still used in inflating balloons today. 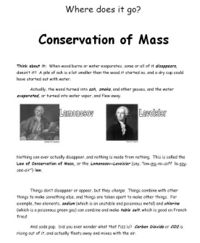 Where does it go?

GE S3-4:13 Students demonstrate their understanding of the Properties of a Gas by…

If we were to continue on in this experiment we could look deeper into why the balloon blows up and with what it fills with. The balloon fills with carbon dioxide because of a chemical reaction between the baking soda and vinegar which gives off the gas of carbon dioxide. Also, given more time we could alter the amounts of both the baking soda and vinegar used greater than we already have in the experiment. We could then observe the different amounts of carbon dioxide given off each time.

We really liked the way the experiment went in the classroom. The three trials allowed us to show the students the results on a graph that was created for the class. The class graph worked very well because we used different colors for each group and the students were able to then go back and discuss the results. One student said, “Look at that, the orange group had the most change in each of their balloons.” This statement showed us as a group that the graph was effective in showing students the change in measurements for each bottle we used.

The worksheets were also very effective because they were age appropriate and therefore fit into our time slot well. Students were able to record appropriate data and had time to write as much or as little as they wanted to. In the future it might be helpful to have a conversation about making observations before the experiment is done. This would allow for more practice writing and more elaborate observations by the students. Overall I was very impressed with how well the students did with the lesson. Each student was engaged and curious about the chemical reaction that caused the balloon to blow up. Most of the students understood that the same type of air that we breathe out is what blew up the balloon but, there were still some students who were confused. I think maybe to address the confusion we could have students talk more about breathing and what happens when they breathe. I think the connection is valuable and would help students understand the concept more. One of the best connections that were made was that a similar group of students working with us did a chemical reaction that powered a car with an explosion. Students were able to take that knowledge and apply it to our groups experiment. I would certainly use this lesson again because the change that the balloon made really engaged the students and allowed them to become curious about lesson!