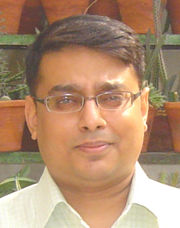 Dr. Arijit Chowdhuri is Assistant Professor in Department of Physics in Acharya Narendra Dev College. He has been one of the workshop coordinators of WikiEd08 and WikiEd09. One of the first faculty members of the college to learn about Wikieducator, he is associated with all kinds of IT work in the college.

He is actively involved in research work in Experimental Condensed Matter Physics with Professor Vinay Gupta, at Electronic Materials and Devices Laboratory (EMDL),Department of Physics & Astrophysics, University of Delhi.

Currently, continuing with my post doctoral research work and Co-Investigator in sponsored research projects with Professor Vinay Gupta at Department of Physics & Astrophysics, University of Delhi in the area of packaged gas sensors based on semiconductor materials and SAW devices besides undergraduate college teaching. My main aim is to tailor the material property by tuning the plasma while processing and to develop a miniaturized packaged integrated sensor device exhibiting enhanced response characteristics.

Ph.D. (Physics) from University of Delhi (2003), Thesis on “H2S gas sensors based on SnO2 films loaded with CuO dotted islands” under supervision of Professor K. Sreenivas.

B.Sc. (Hons) and M..Sc. in Physics (specialization in Electronics) from University of Delhi in 1995 and 1997 respectively

Co-Investigator in project “Development of magnetron source for Plasma assisted growth of Metal-oxide films for sensor applications” sponsored by Department of Science & Technology, Govt. of India (2008-11)

Indigenously designed a Gas Sensor Test Rig integrated with PC based automatic data-acquisition for precise measurements of sensor response (up to 20ppm.

Exploited successfully the spillover mechanism of distributed CuO catalysts on SnO2 surface along with activation of enhanced oxygen activity for developing an efficient gas sensor with three order high sensitivity.

Received the best paper award titled “Sensing properties of evaporated and sputtered SnO2-CuO thin films”— at the 6th National Seminar on Physics and Technology of Sensors (NSPTS-6) held at Thapar Institute of Engineering and Technology, Patiala, Punjab from 4-6th March 1999.

Received certificate of merit from Delhi Administration, Govt. of India for outstanding performance in the secondary board examination.

Integrated piezoelectric ZnO film (3m thick) with MEMs structure of CEERI, Pilani for development of acoustic sensors that have been technically qualified by VSSC (ISRO), INDIA for use in PSLV-C9 flight in piggyback mode.

Member of Editorial board for the International Journal, “Sensors and Transducers”.

Part of the organizing Committee for the following events

INFOSYS Workshop for undergraduate Teachers from Northern region of India(28 Dec.04 to 2 Jan.05)

Participated in “Advanced Workshop on Developing Self Learning Instructional Multimedia Materials” held at CIET-NCERT from 20 – 24 December 2008.

Attended “Supported Blended Learning Workshop” organized at University of Delhi by Open University, UK and Campus of Open Learning (COL) from 31 May – 2 June 2007.

Resource Person at Bamboo and Rattan O.D.L. Course Development workshop organised at School of Agriculture, IGNOU, 21- 23 July 2006. The partners of the workshop were IGNOU-INBAR-COL-CIBART-ANDC.

Actively involved in the organization of refresher course in Computer Applications in Physical Science, 17 February to 9 March 2006, at CPDHE, University of Delhi.

Actively involved in preparing reports in the UGC-ASC Orientation Course, 28 December 2006 to 24 January 2007, at CPDHE, University of Delhi.

Confessions of a trigger-happy academic