The national flag of Niue. 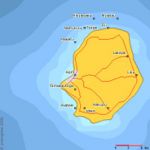 Niue is located to the west of the International date line. It is about 3 hours flight from Auckland Airport.Niue is situated approximately 480km east of Tonga, 550km south-east of Samoa and 900km west of Rarotonga. The island is isolated and does not form part of any recognised group.

Niue has an area just over 259 sq.km. It is aproximately 21km long and 18km wide and the main road which roughly follows the coastline is approximately 64km in length.

The island is am elevated coral outcrop with coral reef fringing a preciptious and broken coastline.

There are only two schools in Niue. One of which is a ECE/Primary School and the other a Secondary school. There are slightly over 200 students in each school and both schools are supported by their own administration staff. Each school is headed by a Principal and both Principals work under the leadership of the Director of Education.

The only Secondary school of Niue is staffed by 26 teaching staff and 6 supporting staff. Students begin at Niue High School at the Year 7 level at about 11 years old to about 18 years or Year 13.

The University of the South Pacific has a Niue Campus that caters for distant learning, community education or adult students. There is also privately operating representation of St Clements University. Most of the students have to go to New Zealand or other regional institutions for further education, be it vocational or academic qualifications.