What is air? Why we need it?

The students can use Email facility to submit their feedback and suggestions.

Air pollution (say: po-loo-shun) occurs when gases, dust particles, fumes (or smoke) or odour are introduced into the atmosphere in a way that makes it harmful to humans, animals and plant. This is because the air becomes dirty. The Earth is surrounded by a blanket of air (made up of various gases) called the atmosphere. The atmosphere helps protect the Earth and allow life to exist. Without it, we would be burned by the intense heat of the sun during the day or frozen by the very low temperatures at night. Any additional gas, particles or odours that are introduced into the air (either by nature or human activity) to distort this natural balance and cause harm to living things can be called air pollution.

What is Air pollution?

Pollution is now a common place term, that our ears are attuned to. We hear about the various forms of pollution and read about it through the mass media. Air pollution is one such form that refers to the contamination of the air, irrespective of indoors or outside. A physical, biological or chemical alteration to the air in the atmosphere can be termed as pollution. It occurs when any harmful gases, dust, smoke enters into the atmosphere and makes it difficult for plants, animals and humans to survive as the air becomes dirty.

Air pollution can further be classified into two sections- Visible air pollution and invisible air pollution. Another way of looking at Air pollution could be any substance that holds the potential to hinder the atmosphere or the well being of the living beings surviving in it. The sustainment of all things living is due to a combination of gases that collectively form the atmosphere; the imbalance caused by the increase or decrease of the percentage of these gases can be harmful for survival.

The Ozone layer considered crucial for the existence of the ecosystems on the planet is depleting due to increased pollution. Global warming, a direct result of the increased imbalance of gases in the atmosphere has come to be known as the biggest threat and challenge that the contemporary world has to overcome in a bid for survival.

In order to understand the causes of Air pollution, several divisions can be made. Primarily air pollutants can be caused by primary sources or secondary sources. The pollutants that are a direct result of the process can be called primary pollutants. A classic example of a primary pollutant would be the sulfur-dioxide emitted from factories 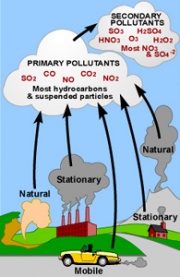 1. Burning of Fossil Fuels: Sulfur dioxide emitted from the combustion of fossil fuels like coal, petroleum and other factory combustibles is one the major cause of air pollution. Pollution emitting from vehicles including trucks, jeeps, cars, trains, airplanes cause immense amount of pollution. We rely on them to fulfill our daily basic needs of transportation. But, there overuse is killing our environment as dangerous gases are polluting the environment. Carbon Monooxide caused by improper or incomplete combustion and generally emitted from vehicles is another major pollutant along with Nitrogen Oxides, that is produced from both natural and man made processes. 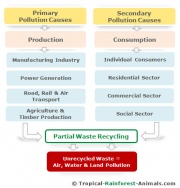 3. Exhaust from factories and industries: Manufacturing industries release large amount of carbon monoxide, hydrocarbons, organic compounds, and chemicals into the air thereby depleting the quality of air. Manufacturing industries can be found at every corner of the earth and there is no area that has not been affected by it. Petroleum refineries also release hydrocarbons and various other chemicals that pollute the air and also cause land pollution.

4. Mining operations: Mining is a process wherein minerals below the earth are extracted using large equipments. During the process dust and chemicals are released in the air causing massive air pollution. This is one of the reason which is responsible for the deteriorating health conditions of workers and nearby residents.

5. Indoor air pollution: Household cleaning products, painting supplies emit toxic chemicals in the air and cause air pollution. Have you ever noticed that once you paint walls of your house, it creates some sort of smell which makes it literally impossible for you to breathe.

Suspended particulate matter popular by its acronym SPM, is another cause of pollution. Referring to the particles afloat in the air, SPM is usually caused by dust, combustion etc.

Video Related to Methods of Control

1. Which gas human being requires for respiration:

2. Which gas is responsible for Green House Effect:

1. Respiratory and heart problems: The effects of Air pollution are alarming. They are known to create several respiratory and heart conditions along with Cancer, among other threats to the body. Several millions are known to have died due to direct or indirect effects of Air pollution. Children in areas exposed to air pollutants are said to commonly suffer from pneumonia and asthma.

2. Global warming: Another direct effect is the immediate alterations that the world is witnessing due to Global warming. With increased temperatures world wide, increase in sea levels and melting of ice from colder regions and icebergs, displacement and loss of habitat have already signaled an impending disaster if actions for preservation and normalization aren’t undertaken soon. 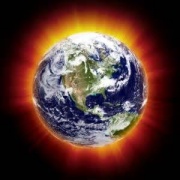 3. Acid Rain: Harmful gases like nitrogen oxides and sulfur oxides are released into the atmosphere during the burning of fossil fuels. When it rains, the water droplets combines with these air pollutants, becomes acidic and then falls on the ground in the form of acid rain. Acid rain can cause great damage to human, animals and crops.

4. Eutrophication: Eutrophication is a condition where high amount of nitrogen present in some pollutants gets developed on sea’s surface and turns itself into algae and and adversely affect fish, plants and animal species. The green colored algae that is present on lakes and ponds is due to presence of this chemical only.

5. Effect on Wildlife: Just like humans, animals also face some devastating affects of air pollution. Toxic chemicals present in the air can force wildlife species to move to new place and change their habitat. The toxic pollutants deposit over the surface of the water and can also affect sea animals.

6. Depletion of Ozone layer: Ozone(O3) is a poisonous gas exists in earth’s stratosphere and is responsible for protecting humans from harmful ultraviolet (UV) rays. Earth’s ozone layer is depleting due to the presence of chlorofluorocarbons, hydro chlorofluorocarbons , methane , ferons in the atmosphere. As ozone layer will go thin, it will emit harmful rays back on earth and can cause skin and eye related problems. UV rays also have the capability to affect crops. Ozone layer is depleting due to the release of pollution containing chemicals arechlorine and bromine.

When you try to study the sources of Air pollution, you enlist a series of activities and interactions that create these pollutants. There are two types of sources that we will take a look at: Natural sources and Man-made sources. Natural sources of pollution include dust carried by the wind from locations with very little or no green cover, gases released from the body processes of living beings (Carbon dioxide from humans during respiration, Methane from cattle during digestion, Oxygen from plants during Photosynthesis). Smoke from the combustion of various inflammable objects, volcanic eruptions etc along with the emission of polluted gases also make it to the list of Natural sources of Pollution. While looking at the man-made contributions towards air pollution, smoke again features as a prominent component. The smoke emitted from various forms of combustion like in bio mass, factories, vehicles, furnaces etc. Waste used to create landfills generate methane, that is harmful in several ways. The reactions of certain gases and chemicals also form harmful fumes that can be dangerous to the well being of living creatures.

1. Use public mode of transportation: Encourage people to use more and more public modes of transportation to reduce pollution. Also, try to make use of car pooling. If you and your colleagues come from the same locality and have same timings you can explore this option to save energy and money.

3. Understand the concept of Reduce, Reuse and Recycle: Do not throw away items that are of no use to you. In-fact reuse them for some other purpose. For e.g. you can use old jars to store cereals or pulses.

4. Emphasis on clean energy resources: Clean energy technologies like solar, wind and geothermal are on high these days. Governments of various countries have been providing grants to consumers who are interested in installing solar panels for their home. This will go a long way to curb air pollution.

Several attempts are being made world wide on a personal, industrial and governmental levels to curb the intensity at which Air Pollution is rising and regain a balance as far as the proportions of the foundation gases are concerned. This is a direct attempt at slacking Global warming. We are seeing a series of innovations and experiments aimed at alternate and unconventional options to reduce pollutants. Air Pollution is one of the larger mirrors of man’s follies, and a challenge we need to overcome to see a tomorrow.

1. Which gas is responsible for Acid Rain:

2. Which gas is responsible for Green House Effect:

Air pollution is global significance unlike water or land pollution. Which are of local or regional effects air pollution transfers the pollutants to water & land or oceans as pollution result of rainfall Air pollution affects plants & animals as well as human being. In urban environment, pollution of air from automobiles exhausts is so high that people wear facemask to protect themselves. The major component of the piosphere is air without which no life can live, without air pure quality;here can be no healthy life. Clean air is pollution rare thing now a day espeially in metropolitan cities. Air pollution differs from industrid less perennial during working hours and they can drift high or low & in any direction depending on the wind & weather. Air pollution spreads & has wide impact than other form of pollution. If water is polluted, one can avoid drinking or may drink it purification. But cannot avoid breathing polluted air. This kind of air contain solid & liquid particles such as dust, carbon, hydro-carbon etc which are elecrically charged & thus kept in suspension by electrostatic forces. It may also contain gases, which are poisonous in nature Sulphur dioxide, Co, nitrogen, hydrogen vaporous & other substances this must harmful element in benzopyrene.

Air pollution may rise due to domestic fire, which is needed for cooking & heating it is a weak & inevitable source of air pollution. Air pollution is caused by vehicles & other combustion engine with constant increase in transportation, the problem of air pollution have become very acute course we have less vehicle then the west yet pollution level is almost the same. This is mainly because of the poor maintenance of vehicles emmi9ting out poisnous smoke & the absence of any effecting deterrent to play such vehicles on the roads. Industry is also the main source & it covers all type of unit,which consume energy in any form. It includes coal, oil, natural gas, electricity or nuclear fission. Dark smoke of industries pollutes the air very much. Thermal power plant also pollutes the air very much. This cause respiratory disease like tubrculosis.

It is to be noted that air pollution adversely affects our health as well as ecology. It is a reality that people living in polluted areas are suffering from certain diseases i.e. lung cancer etc. than the people living in fresh air.