Finding out about Levers

This lesson is intended to address the BC Grade 5 Physical Science Learning Outcomes but may be adapted to suit a wide range of grade levels from Primary to Intermediate. 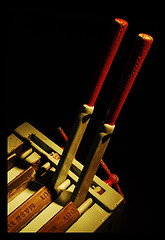 The teacher will guide students to discover that a simple machine, i.e. a lever,can make lifting or moving a load easier. A lever is used with a fulcrum, a single point on which the lever rests. Effort is applied to move the load. The fulcrum can be moved to help the lever become more efficient. A teeter-totter is an example of a lever.