The following are the most common invertebrates collected from this stream site. This site needs additional work. If there are interested individuals sampling this stream please contact Declan (dmccabe@smcvt.edu) to improve this site. 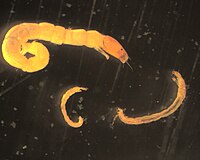 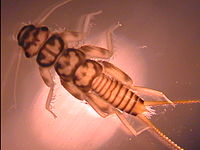 This stonefly is characterized by the three pairs of filamentous gills located on the sides of all three thoracic segments. It is distinguished from the family Pteronarcyidae by the absence of gills on the abdominal segments. Often, the thoracic terga are brightly patterned as pictured, though this is not always the case. Another important feature is that the paraglossae and glossae extend different lengths.

Images of filamentous gills and the family Pteronarcyidae.

Very rarely encountered genera include Neoperla and Hansonoperla. If you believe you have found either of these, please send a specimen our way! 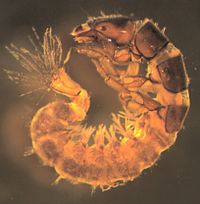 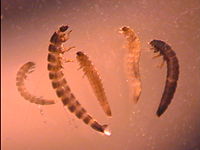 We very commonly find adult and larval riffle beetles. The adults are clearly beetles, but the larvae can be confused with other orders. The forward pointing tooth on the front end of the larvae as described in the key can be a challenge to see, particularly in small individuals. Larvae are characterized by having a single tarsal claw at the end of their legs, which have 4 segments. Adults, on the other hand, have two tarsal claws at the end of each leg. Commonly encountered genera include Dubiraphia, Macroychu, Optioservus, Phanocerus, Promoresia, and Stenelmis.

Images of the adult and larval riffle beetles. 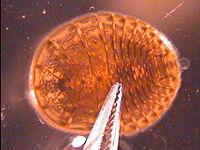 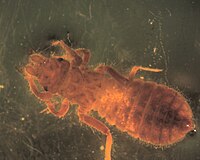