A Rock To Remember/Seventh Grade

Biology In Middle Schools is a Saint Michael's College student project. Link under 'toolbox' for a printer-friendly version. Click on handouts to print full resolution versions. Please see Wikieducator's disclaimer, our safety statement, and the Creative Commons licensing in English and in legalese.

If there are written instructions that students would use during this activity they should be linked from here.

1. Fill the large beaker with water, leaving a small space at the top so that it doesn't over flow when boiling and place on hot plate.
2. Put in your "debris" and allow it to settle to the bottom.
3. Turn on the hot plate to high heat to allow the water to come to a boil.
4. While waiting for the water to boil, ask students what they think will happen to the settled particles as the water heats up.
5. When the water begins to boil, have students observe and record what motion of the particles and the direction in which the hot water moves.
6. You may need to ask up a few students at a time so everyone can get a closer look.
7. Have students diagram what they observe and make hypotheses about what is happening.

Background Information: Convection currents occur when some movable matter in its liquid or gaseous state is heated and the heat created motion of the substance. (Note: suggested questions are included to ask students before it is explained)
Question: What is temperature? Temperature is the measurement of kinetic energy (energy of motion). An increase in temperature would mean that the molecules of a substance are moving faster. There is no particular direction that these particles move in, mostly they are just bouncing off of each other and the container in which they reside. When molecules are moving faster, there is more space in between them and the result is that the substance, in this case, water, becomes less dense.
Question: What is density? Density is the measurement of the amount of pass of an object in comparison to its volume. For example, a glass filled with water is more dense than a glass filled with air because although they have the same volume (the glass container) the water has a much greater mass.
Question: How does the convection current work? The water in the bottom of the beaker is warmed up faster because it is closer to the heat source, the hot plate. This water becomes less dense and eventually the heavier, cooler water above it sinks to the bottom of the beaker to take its place. The hot plate then begins to warm this water so that soon, it too will become warmer and in turn less dense and lighter then the water above it. That water then sinks and the cycle continues. The particles help you see the movement in the water better.
Question: What does this have to do with plate tectonics? The earth is made up of layers, the crust being the thin, outer layer on which we reside. This is made up of several "plates" that move because they float on the liquid mantle beneath the surface of the earth. Convection currents occur in the mantle because the center of the earth, the core, is the hottest layer and acts in the same way the hot plate does in our experiment. There are serveral convection current cycles within the mantle and they make the plates move in different directions causing plate interactions. (These interactions are further discussed in the following activity.) The earth's plates are continuously moving and although they move only centimeters every year, they have caused the creation of many of earth's mountains, islands, oceans and volcanoes and earthquakes.

Be careful of the boiling water and hot plate.

There are some physics connections to thermodynamics and properties of liquids.

This Dynamic Earth:The story of Plate Tectonics by Jackquelyne Klous

S5-6:47 Students demonstrate their understanding of Processes and Change over Time within Earth Systems by…

•Identifying examples of geologic changes on the earth’s surface, where possible, in the local environment (include slow and fast changes).

Consider asking students of locations they know that may show signs of plate interactions (i.e. earthquakes, volcanoes, mid-atlantic ridge). What directions would the convection currents be flowing at those boundaries to cause them to interact the way they do?

Activity 2: Plate Tectonics: The Forces that Shape the Earth

For this activity you will require the following:
• Carpet Squares/Samples→ These can be obtained quite easily from any large store that carries carpets. You will need 4 per pair of students. If you can try to acquire half blue and half brown to simulate the plates they represent.

• Special Carpet Squares→ These should each have a piece of rope or twine running through them about an inch from one of the sides. This will allow you to demonstrate how earthquakes and tsunamis occur. Make sure that the rope is knotted at both ends.

• Colored Pencils/Markers/Crayons→ To colorfully show the movement of plate on worksheet.

Ask students to identify what plate collision is depicted in their drawing. 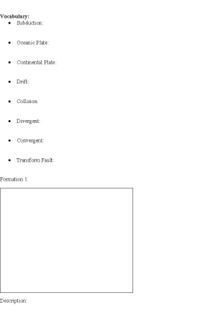 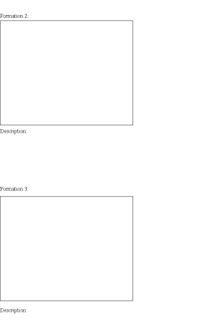 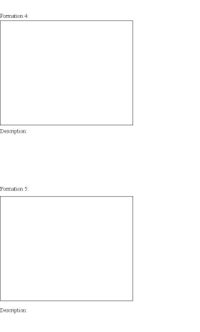 This activity allows students to visually understand how plates and plate tectonics shape the world around them. Using rugs as plates students will recreate the forces and formations.

1. To begin break the class into pairs.

2. Next hand each pair out a set of rugs.

3. Begin a quick lesson on terminology of plate tectonics.

4. Have the students turn their desk to face that of their partners.

5. Now one formation at a time have them create said formation between the desks by colliding the two “plates” together.

7. In the end go over what they learned by having different groups show each formation. After each allow another group to say their description. This allows for participation and allows blanks to be filled in.

8. Finally after activity is over, take out the special carpet squares previously mentioned and show the forces behind the great natural disasters.

Students may need a time limit to this activity as they may easy get bored and play with the rugs in destructive ways.

S5-6:47 Students demonstrate their understanding of Processes and Change over Time within Earth Systems by…

•Identifying examples of geologic changes on the earth’s surface, where possible, in the local environment (include slow and fast changes).

Have students consider some mountain ranges they know. For example the Green Mountains vs. the Himalayas. What may have caused there formation? The Himalayas are currently rising as are the Adirondack Mountains of New York. Do they have any hypotheses as to why this is happening?